Corals are dying on a massive scale due to bleaching caused by hot waters, the third global event in history. In some places >90% of the corals will turn white and die. However a few corals do not bleach even in the hotter water. Unfortunately many of these "genetic treasures" are subsequently killed off by coral predators. The project will involve communities in coral predator removal, the creation of nurseries of resilient corals, and out-planting second generation adapted corals to reefs.

What is the issue, problem, or challenge?

The massive global coral bleaching crisis is expected to worsen in 2016, due to unusually hot waters from El Nino. In bleaching the corals lose their brown micro-algae and they usually starve to death. Without corals, the reefs provide poor fish habitat and communities suffer. In the mass bleaching of 2000 in Fiji, we saw that 10% of the corals did not bleach, but unfortunately these surviving corals were subsequently killed by over-abundant predators, such as crown of thorns starfish, COTS. 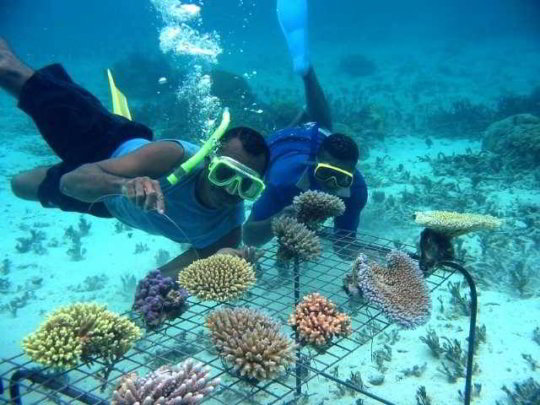 How will this project solve this problem?

We have developed coral gardening techniques that are both effective and low cost, being featured on BBC and Discovery Channel, etc., and reported in the scientific literature. Working with communities we will conduct coral health workshops, and will begin a coral nursery program focusing on rescuing and cultivating fragments of the heat-adapted corals. We will also implement a parallel bounty program for removing the highly destructive and overabundant COTS, using them dried as chicken feed

Communities will be empowered to save the lives of thousands of surviving corals that are resistant to warm water bleaching, but that can not survive the onslaught of over-abundant coral predators without help. These communities will restore patches of healthy corals to reefs by planting second generation climate-adapted corals of diverse species. Five villages in Fiji, or a total of 2,500 people, 2,000 people on Tanna, Vanuatu, and 700 people on Christmas island Kiribati will benefit.

What is Netwrix Donation?
Netwrix Donation is a Netwrix charity program for supporting good causes throughout the world alongside our customers.
What is GlobalGiving?
GlobalGiving is a charity fundraising web platform that gives social entrepreneurs and non-profits from anywhere in the world a chance to promote their projects and raise the money they need to reach their goals. Since 2002, GlobalGiving has facilitated nearly $100 million of donations to more than 8,500 charity projects around the globe. For more information, please visit www.globalgiving.org
How are donations being made?
We encourage you to choose one of the available projects by clicking the "VOTE" button, and Netwrix will donate $1 for each vote on your behalf.

Thank you for voting. You are our Superhero!

It's time to discover your hidden superpowers!

Oh-oh...Did you want to do more good things?

Your superpower will recharge tomorrow – then you can vote again.